Most of the ten short stories in this collection center on teenage lesbians dealing... read more

Most of the ten short stories in this collection center on teenage lesbians dealing with common situations: making up after a break up, coming out, reconciling with a former straight best friend, or having a crush on an unattainable older woman. They are gritty, raw, and intense, like adolescent love itself, often driven more by the heart than the head. The author plays a bit with narrative style in her stories. “TIAD” is written mostly as a series of chat room, IM, and email messages as Hayley pours out her broken heart to several anonymous participants in a teen lesbian chat room, and finds herself latching on to the most sympathetic among them, the mysterious Black_Venus. “Outside/Inside,” follows a crushed-out teen as she selects just the right mushy greeting card to send to the object of her affections as a way of expressing her true feelings for the first time. The most unusual story is about a trans boi who has just gotten his first prosthetic penis. Peters doesn’t gloss over the loneliness and violence that’s part of reality for many queer teens, and some of her stories, like “Boi” are painful to read. But there are also stories with a more optimistic outlook, including one with a satisfyingly romantic, walk-into-the–Sunset, happy ending. (Age 14 and older) 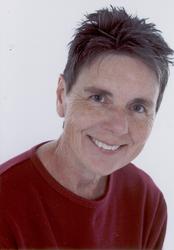