Chicago teenager Violet Paz is interested in hanging out with her friends and following... read more

Chicago teenager Violet Paz is interested in hanging out with her friends and following the Cubs. Her father is Cuban, her mother is Polish American, and while Violet can play a mean game of dominoes, her blond hair and green eyes link her visibly to the European American side of the family. When her Miami grandparents arrive for a visit shortly after her 15 th birthday, her abuela is brimming with plans for Violet’s quinceañero , a traditional Latin American celebration marking a girl’s coming of age. At first horrified at the thought of wearing a pink dress and tiara, Violet learns more about the meaning behind the celebration. With the help of her friends and family in the months leading up to her party, she constructs an event that reflects her unique identity while honoring the customary ritual. While the quinceañero officially marks Violet’s maturation, her personal growth during her 15 th year is highlighted by her emerging interest in her Cuban heritage, a quest challenged by her father’s reluctance to discuss anything to do with his birthplace. As Violet looks for answers, her father’s and grandparents’ vehement opposition to Castro’s Cuba is tempered by her Aunt Luz’s desire to see an end to the Cuban embargo. Ultimately, Violet must develop her own opinions. In a fresh and humorous voice, Violet winds her way through a pivotal adolescent year, full of realistic growth and change, including her rookie season on the school’s speech team and a budding romance. Violet’s vivid and warm family members shine as solid characters in their own right throughout this stand-out debut novel by a first-time author. (Ages 12–15) 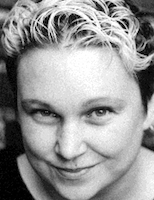