Continuing the story of Corzon and Isabelle begun in Chains (Simon & Schuster, 2008), Laurie Halse Anderson takes her protagonists into the heart of the Revolutionary War. Enlisting in the patriots’ army to avoid re-enslavement after escaping from a British prison, Corzon ends up in an army regiment that winters with Washington’s troops at Valley Forge. Details of life there unfold in vivid scenes that also chronicle Corzon’s growing friendship with fellow soldiers, most (but not all) of whom treat him as an equal. When Corzon’s former master shows up at Valley Forge, Corzon is re-enslaved and discovers that runaway Isabelle has also been captured. Anderson deftly uses flashbacks to recount necessary details from Chains as she sets this compelling tale of the fierce desire for freedom against the backdrop of our nation’s fight to be free of tyranny. A helpful question-and-answer section at the novel’s end clarifies fact from fiction in a narrative grounded with terrific characters, and propelled by a swift-paced plot. (Age 11 and older) 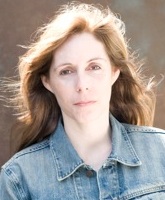 Created by The Writer

Margaret A. Edwards Speech given by Laurie Halse Anderson

Created by Mackin Books in Bloom