Edward and the Pirates

Edward has an active imagination, greatly enhanced by the stories he reads in library... read more

Edward has an active imagination, greatly enhanced by the stories he reads in library books. He has adventures with Robin Hood, Joan of Arc, and Admiral Peary and, once, he even thought he saw a dinosaur walk past his window while he was reading. But none of these sights compare to what happens when he starts to read of hidden pirate treasure: a gang of pirates come into his bedroom at night, demanding he turn over the book or else he'll have to walk the plank. Edward refuses--it's a library book, after all, checked out on his card! A witty, satisfying tribute to the life of the mind and the power of reading aptly blurs the line between fantasy and reality. (Ages 3-7) 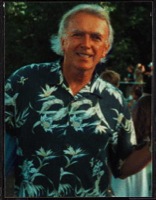