Teenage Paige dreams of being an artist but is plagued by self-doubt. With her family’s... read more

Teenage Paige dreams of being an artist but is plagued by self-doubt. With her family’s recent move from Virginia to New York City, she decides to buy a sketchbook and start drawing seriously. At her new high school, she connects with a few artsy kids but still battles intense periods of low esteem and doubt. It’s only when she takes a risk and starts showing her art to others—starting with her friend-becoming-boyfriend Gabe, then a few additional friends, and eventually online—that she begins to believe in her ability. Not that her audience isn’t without criticism: She’s stung when someone says her art suggests she’s very wrapped up in herself. It’s true! And it’s also part of what makes the characterization of adolescent Paige so authentic. Laura Lee Gulledge captures a young artist’s self-discovery with poignancy and humor in this appealing graphic novel. Gulledge’s black-and-white drawings include images representing Paige’s art, with clever drawings of her inner self which are at once symbolic and literal. (Ages 11–14) 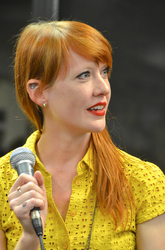