Inside Out & Back Again

In South Vietnam in 1975, ten-year-old Ha lives with her mother and three older brothers.... read more

In South Vietnam in 1975, ten-year-old Ha lives with her mother and three older brothers. The violence of the Vietnam War reaches them in the midst of celebrating Tet—Vietnamese New Year. With Saigon falling, Ha’s family makes it onto a transport ship. Their journey’s ultimate end is the American Deep South: Alabama. Thanhha Lai’s novel chronicles Ha’s family’s flight and adaptation to their new life in poems full of insight and sharp humor. For Ha, it’s not just language and food and culture that are foreign, it’s the faces and attitudes around her and the feelings she has about herself. While some people in their new community are kind to Ha’s Vietnamese family, others are not. When her new teacher tells the class to clap when Ha counts to twenty in English, Ha is “furious / unable to explain / I already learned / fractions / and how to purify / river water. / So this is / what dumb / feels like. / I hate, hate, hate it.” Ha’s struggle with esteem, and the profound sense of longing in the story for what has been left behind, is balanced by the sense of looking forward to a future of hope as the strange new place begins to feel like home. Lai’s writing vividly conveys characters, scenes, and emotions in this compelling debut. (Ages 10–13) 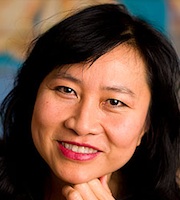 Interview about accepting the National Book Award with Thanhhà Lại

Created by Diversity in Action (Dia)

Created by University of Queensland Press