Fumiko Ishioka was director of the recently established Tokyo Holocaust Center in 1998. The small museum’s aim was to teach Japanese children about the Nazi Holocaust. In response to Fumiko’s request for items to exhibit, the Center had received a small box of objects from Auschwitz that included a child’s suitcase. Scrawled on the suitcase was the name and birthdate of its owner: Hana Brady, born May 16, 1931, and the information that she was an orphan. The suitcase inspired the curiosity and compassion of Fumiko and the children to whom she showed it—they wanted to know more about this young girl. In alternating chapters, two stories unfold. One is tender and ultimately tragic, as it chronicles Hana’s early life with her parents and brother in Czechoslovakia and how she was eventually deported by the Nazi’s, first to Theresienstadt and finally to Auschwitz. The other is intriguing and ultimately extraordinary, as it follows the efforts of Fumiko over the course of two years to learn more about Hana, starting only with a name. The stories converge in a startling moment of revelation and its emotional aftermath when Fumiko finally learns that Hana died at Auschwitz, but her older brother, George, survived the Holocaust and is still alive. The letter that Fumiko wrote him introducing herself and all that she had learned, as well as the letter he wrote in reply, marked the end of Fumiko’s search. The following year George traveled to Tokyo, where he met Fumiko and the children in Small Wings, the peace group inspired by Fumiko—and Hana—to help teach other children in Japan about the Holocaust. Numerous childhood pictures of Hana Brady, as well as reproductions of some of the pictures she drew while in Theresienstadt, are included in this highly accessible and moving volume. (Ages 9–14) 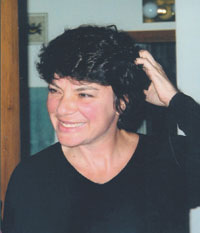