The Story of Owen: Dragon Slayer of Trondheim

In this alternate to the world as we know it, most things are the same with one huge... read more

In this alternate to the world as we know it, most things are the same with one huge exception: carbon-craving, mammal-eating dragons have always existed, along with a long, proud tradition of dragon slaying. Every town once had its own dragon slayer, but the Industrial Revolution saw dragon slayers lured away from small towns to defend big cities like Detroit (it didn’t work — Detroit and most of Michigan were laid to waste). Recently retired, world-famous dragon slayer Lottie Thorskard wants to renew the tradition of community-based dragon slaying, so she’s moved to a small town in southern Ontario to train her nephew, Owen, and to recruit Owen’s classmate, Siobhan McQuaid, as Owen’s bard — another tradition that’s languished. Observant, musically talented Siobhan is the narrator of this lively, richly imagined story chronicling Owen and Siobhan’s emergence into their new roles, which coincides with a new rash of dragon attacks that leads them to suspect previously undiscovered hatching grounds may be closer than anyone realized. Fast-paced (locating the hatching grounds turns into a race against time), funny (driver’s ed. includes dragon evasion, since the beasts are attracted to most cars), and thoughtful (What is lost when traditions are abandoned in the name of “progress”? What is gained when traditions are challenged?), E. K. Johnston’s sure hand succeeds in all dimensions of world-building, from the cleverly reimagined events in world history to the complexity and appeal of her characters. (Age 12 and older)

Meet-the-Author Recording with E.K. Johnston about The Story of Owen 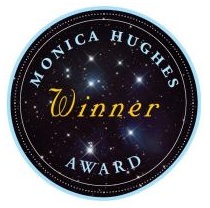 What Happened to Serenity?

by Kenneth Oppel and Jim Tierney

by Kallie George and Alexandra Boiger

by Kenneth Oppel and Jon Klassen