Popular Liz Emerson was trying to commit suicide when she ran her car off the road.... read more

Popular Liz Emerson was trying to commit suicide when she ran her car off the road. But she’s survived, at least for now. With Liz in the ICU, flashback chapters from the perspective of her best friends, Julia and Kennie, her mom, Monica, and Liam, a boy who loved Liz without ever telling her, reveal what led Liz to the point of such despair. Liz, it turns out, was good to her friends, but not very nice to others. In fact, she could be quite cruel, and Liam was one of the victims of her cruelty. But the journey back in time also reveals that Liz wasn’t always this way. After her dad died in an accident for which she blames herself, Liz moved away from the kind person she once was. Self-hatred fueled her downward spiral, compounding itself because she also hated the person she’d become. The tension in Amy Zhang’s debut novel is revealed not only through the constant reminder of Liz’s devastating act (chapters are titled in relation to the event, e.g., “Five Years Before Liz Emerson Crashed Her Car,” “Fifty-Five Minutes Before Liz Emerson Crashed Her Car”) but also in Liz’s despicable behavior and genuine despair. Her survival, it is clear, depends on much more than her body healing. The novel concludes with hotline numbers for anyone needing help if they or a friend are considering suicide.
(Age 14 and older) 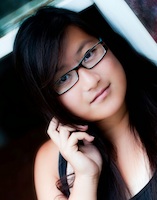