by Samantha Vamos and Ryan O'Rourke

The Alphabet Train is leaving the station! That would be many trains, actually, in... read more

The Alphabet Train is leaving the station! That would be many trains, actually, in this A (Auto-Train) to Z (California Zephyr) look at different kinds of rail transport. The examples range from the general (freight train) to the specific (“Q train—Fifth to Lex”), all presented in paired letter couplets (“O is for ore train, hauling iron in the back. P is for Pacific Surfliner. Store your surfboard on a rack.”). Brief information about the specific trains or kinds of trains listed is provided at book’s end. Young train enthusiasts will be on board with this alphabet book, made even more inviting by the stylized illustrations suggestive of early to mid–20th century travel posters. (Ages 3–7) 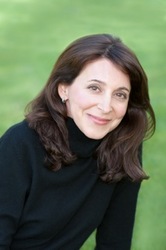