Set in the early 1990s, 16-year-old Rani is living in Hawaii with her immigrant Gujarati... read more

Set in the early 1990s, 16-year-old Rani is living in Hawaii with her immigrant Gujarati Indian parents. Rani’s mother quietly obeys her husband but is deeply unhappy in a marriage in which he is cold and unfaithful. If Rani’s mother is overworked and unloved by Rani’s father, Rani is his princess. Then Rani catches her father kissing a young woman not much older than she is. Her anger is fierce and her home life begins to unravel. At the same time, she’s invited to join a secret rap group by her high school friend, Pono, and discovers an underground rap community on her island. Rani has a crush on Pono, but she’s also attracted to Mark, the group’s founder. Rap is the way Rani expresses her anger and pain, including pain about her father’s sexual abuse. She’s never told anyone about it until Mark becomes her boyfriend. At first he is gentle and supportive. But he’s also a 31-year-old man and recovering drug abuser who eventually starts to abuse Rani. Still, she can’t bring herself to leave him, a dynamic tied to the lasting psychological effect of the abuse at her father’s hands. Rani’s raps are fierce, and feminist, but speaking the truth about and to the people who’ve hurt her takes the support of others, and belief in her own self-worth. This gritty, triumphant novel includes an excellent author’s note about the dynamics of abuse. (Age 14 and older) 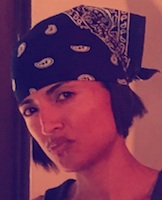 Created by Fragments of Life