To Stay Alive: Mary Ann Graves and the Tragic Journey of the Donner Party

A novel in verse in the voice of 19-year-old Mary Ann Graves tells of her family’s... read more

A novel in verse in the voice of 19-year-old Mary Ann Graves tells of her family’s journey west by wagon in 1846. They eventually join another group that includes the Donner family. The travelers reach the foothills of the Sierra Nevada range late and the snows come early, stranding them in the mountains. With food scarce, Mary Ann, her father, and her older sister are part of a smaller group that attempts the pass, hoping to send back help for the others. They end up lost in a storm. Mary Ann’s father, a driving force of optimism early on in the journey, a voice of pragmatism later, is one of the first to die. There is an absolute lack of sensationalism in this moving account of the Donner Party, and the grim decision to eat those who died. Mary Ann’s voice stitches a story of small, compelling details, creating a vivid sense of people, time, and place. And she describes the desperation from hunger and malnutrition that turn an unbearable, unthinkable choice into one that becomes numbly inevitable for anyone hoping to survive. An author’s note tells more about the Donner Party’s journey, and Mary Ann’s life after she and other survivors were rescued. (Age 12 and older)

Meet-the-Author Recording with Skila Brown about To Stay Alive 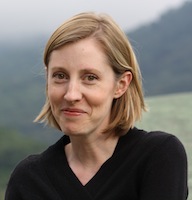