by Dave Eggers and Shawn Harris

A 94-page picture book about the Statue of Liberty begins as a funny, sometimes downright... read more

A 94-page picture book about the Statue of Liberty begins as a funny, sometimes downright satirical look at the statue’s construction and design. (“While the statue was rising, Bartholdi set up a lunch, four stories up, to impress and enthrall these French writers, who, being difficult to impress and enthrall, were at least mildly amused.”). The narrative never loses its sense of humor as it seamlessly transitions into a heartfelt, thought-provoking reflection on the statue as a symbol of liberty and freedom and refuge. Have you ever noticed, the unseen narrator asks, that the statue is mid-stride? That her right foot is poised to take another step? Why? “Here is an idea. Here is a theory. Here is a reminder. If the Statue of Liberty is a symbol of freedom, if the Statue of Liberty has welcomed millions of immigrants to the United States, then how can she stand still? … In welcoming the poor, the tired, the struggling to breathe free. She is not content to wait. She must meet them in the sea.” Unabashedly patriotic and grounded in a social justice perspective, the narrative is paired with terrific construction paper and India ink illustrations that are also rendered with both humor and poignancy. (Age 8 and older)

Meet-the-Author Recording with Dave Eggers about Her Right Foot 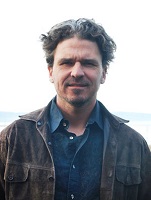 Teacher's Guide from Reading is Fundamental