Beautiful bookmaking including decorative elements and occasional full-page, full-color illustrations accompanies a fresh story spun from Grimms’ “Snow White and Rose Red.” The two sisters have lived with their mother in a small cottage since their nobleman father disappeared. Snow has never given up hope that their father will return. Intensely spirited, she’s sometimes volatile in her grief. Calmer Rose takes comfort in the natural world. On forays into the woods the sisters meet Ivo, a boy who lives underground with his family of mushroom foragers; discover a library of stories in the form of random objects; and meet and rescue a little man who is caught in the beak of a gigantic crow, and later in the mouth of a massive fish. A huntsman saves the sisters from a huge wolf, but they are sad the wolf was killed. So when they find a giant bear in a trap, they free him despite their fear. These oversized animals are inexplicable, an ominous plague in the woods. But when the bear, staggering from its trap injuries, shows up at their door, the girls and their mother take him in and care for him, keeping him a secret from the hunter. The original turns of the story are marvelous as the episodic chapters merge into a cohesive whole, one that makes for a more-than-satisfying fairy tale and also a moving exploration of grief and loss, fear and hope. (Ages 8-12) 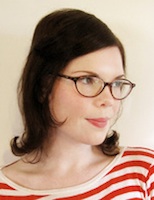