This follow-up to the earlier Cousins (Philomel, 1990) stands strongly on... read more

This follow-up to the earlier Cousins (Philomel, 1990) stands strongly on its own as the author continues to chronicle events in the life of Cammy Coleman. Now 12, Cammy is at the center of an intricate web of family relationships that unfold and are revealed in this lively, multilayered novel. It has been a year since Cammy's cousin Patty Ann drowned in the accident at the river and Cammy and her cousin Elodie have grown as close as sisters, bound by that event, of which they rarely speak, but also by the joys and adventures of childhood. As extended family members gather from around the country for a family reunion, Cammy and Elodie are thrown together with Gigi and Fractal, two of their cousins from New York City. This pairing of city cousins and country cousins leads to shifting relationships that leave Cammy a bit unsettled. First Gigi and Elodie hit if off, leaving Cammy somewhat hurt, and then Fractal (nicknamed for her love of the mathematical phenomenon), a smart, computer savvy teen, takes special interest in Cammy herself. Extensive discussions of current computer technology between Fractal and Cammy may date this novel in years to come, but they won't lessen its powerful emotional undertones. As the increasingly complex plot develops and moves toward the climactic family reunion, Cammy must deal with an unexpected, devastating revelation about her father and her relationship with Fractal at the same time she tries to prepare herself for the reunion itself. It will include a trip to the river, which she hasn't been to since Patty Ann died. It is Gram Tut, who helped Cammy through the trauma of Patty Ann's death, who leads the family to the river, where they enter the flow of memory and pain and healing and joy for all that has happened to generations past and for all who are to come. It is a transcendent experience--for Cammy and for readers of this novel distinguished by Virginia Hamilton's usual fine characterization and rich storytelling voice. (Ages 10-13) 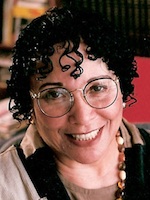