In 2008, Kollie, whose family emigrated to the United States from Liberia due to... read more

In 2008, Kollie, whose family emigrated to the United States from Liberia due to civil war, is struggling. After Kollie is suspended from school for beating up an African American classmate, Kollie’s father decides to send him back to Liberia. In 1926, Togar is fleeing soldiers who raided his village to conscript men and boys for work on farms owned by Congos—descendants of African American immigrants to Liberia. In 1827, Yasmine and her children escape slavery for Liberia, the trip arranged by white men whose motivation is to rid America of the problem of slaves. Following hardship and tragedy, Yasmine’s family becomes part of Liberia’s ruling class, although her daughter choses life with the boy she loves from a native tribe. In 1980, Liberian student Ujay is involved in government protests while the young woman he loves is a member of the ruling class who acknowledges the need for change but does not know how to achieve it. The price for political change proves high. And in 2018, Kollie’s sister, Angel, is piecing together this history, one in which oppressed become oppressors, and racism and classism seem endemic to the human condition. It is the history of her family, and a single talisman, the clasp of a purse, runs through it. So, too, does kindness and love—things that can and must endure. An informative and personal author’s note concludes this ambitious exploration of the painful, long-lasting effects of the colonization in Liberia by formerly enslaved African Americans. (Age 15 and older) 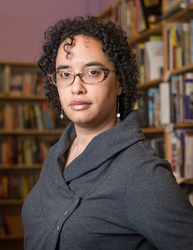