Luke Bledsoe has been fighting his left-handedness his entire life. Like his passionate... read more

Luke Bledsoe has been fighting his left-handedness his entire life. Like his passionate minister father, 14- year-old Luke knows that the left hand is the hand of the Devil, and so he struggles to use his right hand only. In 1921, Luke and his family move to a new parish along the Ohio River and one of the biggest things in town is baseball. This means nothing to Luke until the day he absentmindedly tosses a stray ball back to players in a game. He uses his left hand, and the speed and strength of his throw amaze everyone who sees it. Pressured to join the team, Luke refuses. Not only is left-handedness forbidden by his father, but sports are too. Still, Luke can't help but start to wonder. If left-handedness is so bad, why would God make it so easy for him to do things with his left hand and so difficult for him to do things with his right? John H. Ritter has done an exemplary job creating three-dimensional main characters in this finely nuanced first novel. Luke's father, a fire-and-brimstone preacher in the pulpit, clearly loves his son and cares about his well-being and their relationship. He regrets his rage, when it flares up brutal and harsh, not only because it goes against the teachings of Jesus but also because it has hurt his child. Luke's transformation from follower to questioner to one who will honor his own inner truth rather than the teachings of his father's religion occurs slowly, subtly, and with the intense pain that comes with the realization that your parent, and all that you have been taught to believe, can be wrong. (Ages 11-14) 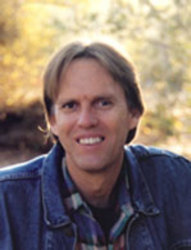 Lesson Plan about Into, Through, and Beyond from John H. Ritter

Lesson Plan about the Socratic Method from John H. Ritter