Just in Case: A Trickster Tale and Spanish Alphabet Book

On his way to his friend Grandma Beetle’s birthday party, Señor Calavera is stopped by Zelmiro the Ghost, who reminds the skeleton to take a gift. But what should Señor Calavera get her? “The thing she would love most,” suggests Zelmiro. There are many things Grandma Beetle loves—one for each letter of the Spanish alphabet in Yuyi Morales’s wonderfully illustrated, humorous tale. Zelmiro fulsomely praises each of Señor Calavera’s choices in turn, from una Acordeón (accordion) to una Loteria (a game) to Yerbabuena, an herb to “soothe her day.” But, he asks repeatedly, is it what Grandma Beetle would love the most? It turns out Zelmiro has an idea of his own in a story that offers a surprising turn on the final page of the tongue-in-cheek tale. Richly detailed illustrations are full of vibrant colors, warmth, and whimsy, making the skeleton and ghost anything but scary in this follow-up to Just a Minute: A Trickster Tale and Counting Book (Chronicle, 2003). As in the original, the Spanish words here are smoothly defined in context. (Ages 4–8)

Meet-the-Author Recording with Yuyi Morales about Just in Case 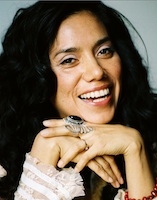