by Jane Kohuth and Rosanne Litzinger

Estie prefers animals to humans. In fact, she is so shy that she pretends to be an... read more

Estie prefers animals to humans. In fact, she is so shy that she pretends to be an animal whenever she’s around people, a behavior that frequently causes her parents and grandmother to remind her to “be a mensch,” a word that means person , specifically a good one, in Yiddish. But Estie finds reasons to be animals instead wherever she goes. She pretends to be a chimpanzee at the grocery store, a seagull at the beach, and an octopus at the swimming pool. When her grandma takes Estie to the zoo with her friend and her friend’s grandson, Estie’s animal imitations delight and entertain little Petie, much to Estie’s surprise. This inspires her to do something nice for Petie, prompting her grandma to say, “She’s a real mensch.” The whimsical stylized illustrations underscore the childlike humor of a well-paced story about a singular child who has figured out an unusual way to cope with shyness. (Ages 3–7) 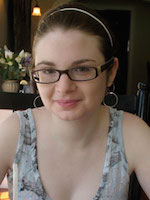