What the Night Sings

This gorgeously produced book offers a unique look at the difficulty of life after... read more

This gorgeously produced book offers a unique look at the difficulty of life after liberation from Nazi death camps: creating a family, finding a home, rebuilding one’s life as a refugee. After years of evading capture by Nazis, Jewish Gerta and her father were discovered. Her father was immediately murdered upon arrival at Auschwitz, but Gerta’s talent on the viola granted her a place in the women’s orchestra despite her young age. She was later sent to Bergen-Belsen. In the aftermath of the war, Gerta is now a refugee recovering from physical and emotional trauma. Flashbacks provide glimpses of her life before Auschwitz: Music was Gerta’s life and passion. A talented singer, she was preparing for her opera debut under the tutelage of her stepmother. Although she hung onto her viola until the war’s end, she’s lost her voice and must grapple with her new post-war identity. Who is she without her family and music, and what can she do if not sing? Her father had kept her ignorant of her Jewish heritage for years before they were captured, and Gerta now struggles to associate anything good with being Jewish. Some refugees talk of going to Israel, and Lev, a kind, devout Jew, wants desperately to marry her, but Gerta is reluctant, and fearful of commitment. Delicate ink wash illustrations are perfectly suited to this somber and illuminating story. (Age 12 and older) 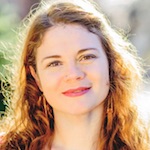 by Esther Hershenhorn and Rosanne Litzinger

Confessions of a Closet Catholic

by Brenda A. Ferber

As Good as Anybody

by Richard Michelson and Raúl Colón

The Entertainer and the Dybbuk

by Karen Hesse and Chris Sheban

A Bottle in the Gaza Sea

by Aubrey Davis and Dušan Petričić