Two Korean American sisters are “look-alike twins” who share everything, including the striped blanket they’ve had since they were babies. Now that they’re five and the blanket is too small to cover them both, they argue fiercely—if briefly—over who should own it before Mommy says it’s time for new blankets, and separate beds. Each girl picks a different, distinct fabric. There’s a bit more arguing over whose blanket Mommy should make first, but in the end all is well ... almost. It turns out it’s hard to sleep in separate beds, until each finds the other’s hand. Hyewon Yum’s delightful, pitch-perfect picture book is masterful in every way. Page spreads place one twin on each side, making it clear which is which and who is saying what. The sibling relationship is wonderfully realized. And children will delight in the many visual discoveries to be made, from the things that distinguish each girl or underscore their feelings, to the way the old blanket is incorporated into the new one, to the marvelous end papers that repeat the new blanket fabrics, one inside the front cover, one inside the back. Highly Commended, 2012 Charlotte Zolotow Award (Ages 3–6) 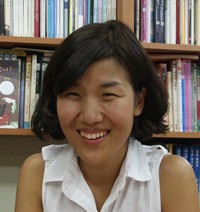