Independent, artistic Karou lives in Prague, trying to pass for a typical teen. No... read more

Independent, artistic Karou lives in Prague, trying to pass for a typical teen. No one knows her indigo hair comes from a wish not a bottle, or that the impossible creatures she draws are real. Karou was nurtured from infancy in the workshop of Brimstone—part human, part lion, part ram. He and his chimaera companions love Karou but give her no answers to questions about her origins. Then a seraph—an angel—tries to stop Karou from returning to Brimstone’s workshop through one of the magic portals that connect it to our world. She’s saved by her hamsas—the eye tattoos on her palms—which wield a power she knew nothing about. In search of answers, she enters a passage Brimstone has always forbidden and discovers another world before Brimstone catches her and casts her out. Not long after, the portals to his workshop are destroyed by the seraph. Determined to find a way back to those she loves and the world she discovered, Karou puts a plan in motion. But the seraph—Akiva—has come to Prague to find her. He is haunted by Karou—by whom she reminds him of. Tethered in our world but influenced by events in another, Laini Taylor’s richly imagined fantasy features a steely, smart protagonist, an anguished angel, and conflict on an epic scale as Karou and Akiva—chimaera and seraph—prove to be a star-crossed duo daring to imagine an end to a centuries old war between their kinds. Taylor’s vivid storytelling trades swift pacing for lush details of setting, character, and feeling in a story to be continued. (Age 13 and older) 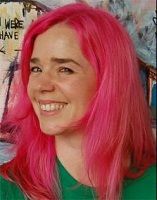 Created by Books Complete Me